Back at Beaudry RV Resort in Tucson

We are back in Beaudry after spending 4 days in a couple of state parks in the Arizona desert and we had a great time!

We are here at Beaudry over the weekend and we cross into Mexico on Monday morning.

We have been indulging ourselves at the restaurant again, had a great fillet mignon and talipia last night!

Pictures of the park: 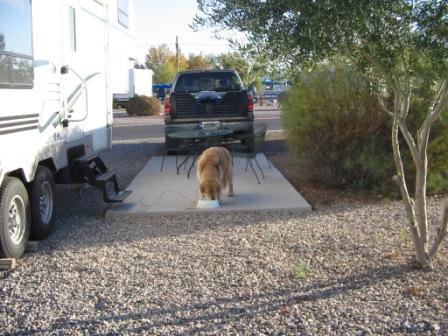 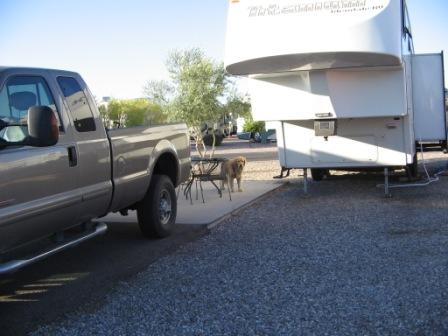 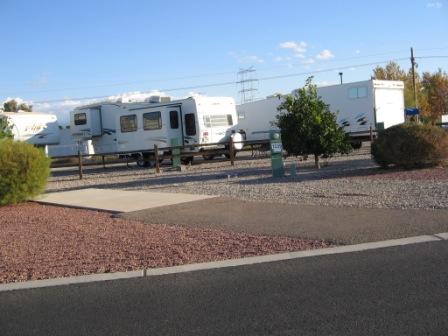 This state park is north-east of Tucson and is unusual in that it has a lake in the desert. The lake is about 350 acres and results from a natural mineral spring that comes out of the hills nearby. The water has lots of minerals and smells a little of sulfur, there is even a hot tub to bathe in! You can see the minerals in the picture below:

Kasey enjoyed this park (not many prickles!), the trails were nice, leading up to a Mesa above the campground, where a great view of the surroundings could be seen: 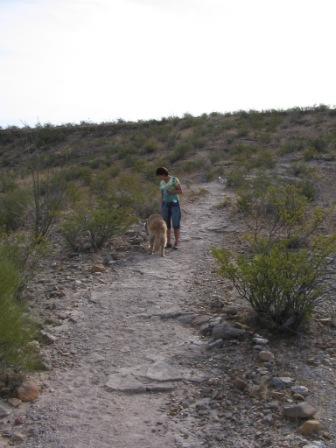 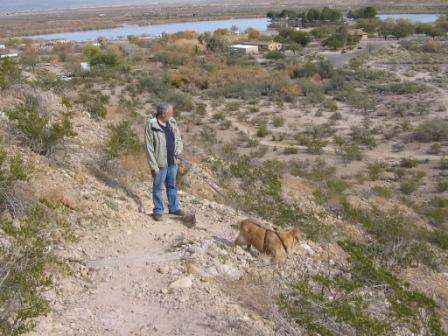 The lake attracts a lot of water foul, mostly ducks who spend the winter here, all the dots on the water are birds: 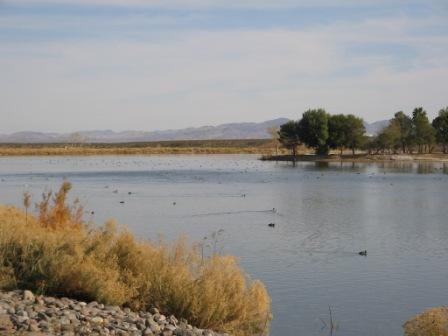 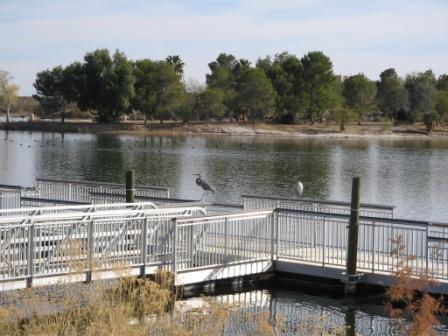 We had a good campsite, with lots of open area and a shelter that is probably handy to keep out of the sun in the summer. Talking to the locals, the temps get up to 110-115  F  range  in the summer, there are lots of warnings about taking enough water on hikes. 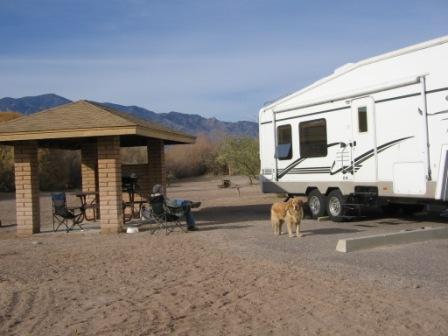 
We got tired of the gravel and too many big rigs at Beaudry,  so we decided to try this state park just outside Tuscon.  As we have seen in  other state parks, it  is dramatically underused  but it is in great shape with scenery and good hiking trails. We took a couple, but Kasey was having problems with prickles in the trails and outside the camper, so we limited the length of the hikes.

Later on, we found out a couple of things about the prickles: they are strong enough to pierce bicycle tires (a neighbour installed heavy duty tubes and self sealing "goo" to keep his mountain bike tires inflated) and some of the prickles made their way into our bed courtesy of Kasey (ouch!).

The days were warm, but once the sun goes down, the nights get cool. One night, the water hose froze outside.

Suzette plied the roadrunners with our stock of peanut munchies so she could get some up-close pictures. These guys look very much like the cartoon character and they make a similar "beep". We have another 50 or so pictures if anyone wants them!! 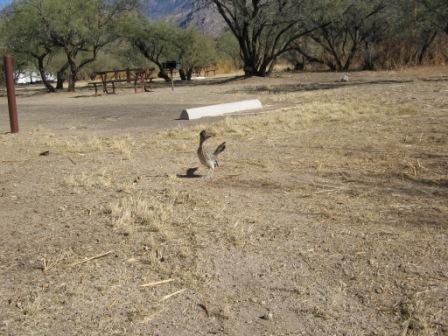 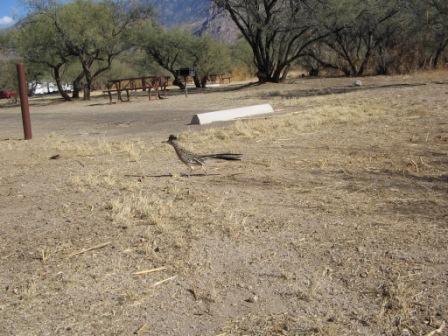 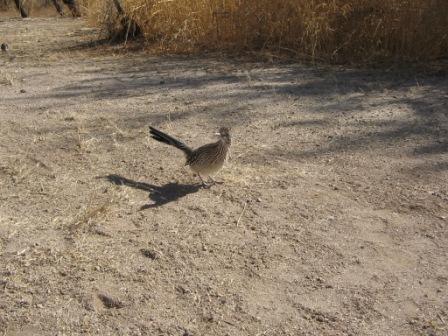 This is the desert, so these monsters are growing all over. In spite of the prickles on them, birds actually land and feed off of them. 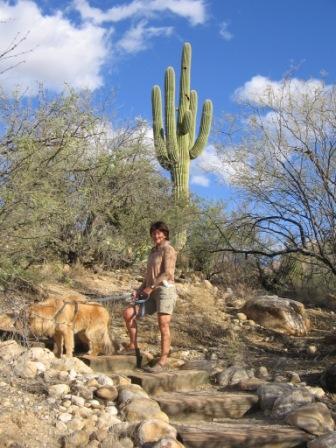 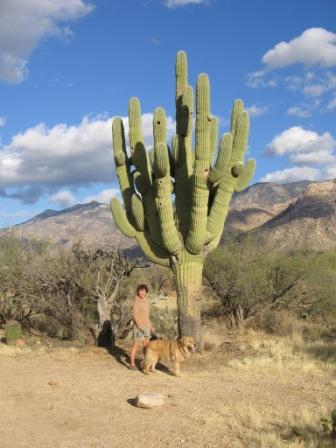 This picture shows a wash, a dry river bed that gets flooded after a heavy rain: 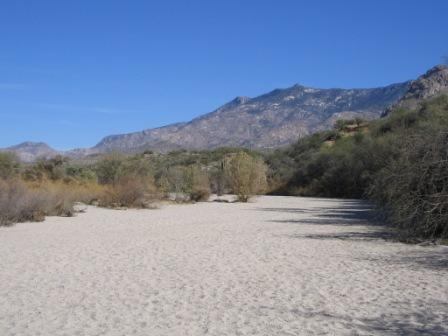 We have been having problems with a trailer tire all the way from Canada, with a slow leak. Instead of filling it every other day or so, I finally decided to take it off and check it. There was a nail in the inside sidewall after only 2500 miles (looks suspiciously deliberate, probably done in Canada), so a Goodyear place was found to replace it (after taking the tire off in the park, putting the spare on). Turns out Goodyear is on strike down here, so we got a Kelley replacement from the Goodyear guy, installed it on the trailer again, only to find a leak still present the next day! The "experts" at Goodyear forgot to check the valve stem, which was leaking at the base. The tire was taken off the trailer again! and this time taken to a local service shop where a Mexican gentleman dismounted the tire, replaced the stem, remounted the tire and balanced the wheel, all in 20 minutes for $7!!. Motto: trust the locals, they do a better job! Now I can change tires almost as quickly as the Nascar pit crew guys!

We arrived at this resort around noon today. We are on the resort's wifi, but the speed is not great, and downloading pictures is problematic.

Late in the day, the speed may be better, we will try again. Kasey was at the vets today for hot spots, he has an "Elizabethan collar" to put on to stop biting, but the problem is not serious.

It's a great resort, we treated ourselves to dinner at the restaurant on-site tonight!

We spent the night at this KOA, it was cold and windy. Suzette was able to get the clothes washed during the day. We emptied another 30 lb bottle of propane keeping the camper warm overnight.

We are sure that it will be warmer as we head into Mexico!

We had a great stay at this state park in the high desert of New Mexico. The camp site had water and electricity, we dumped upon exit. The day was warm, but the wind howled overnight, it was close to freezing most of the night.

There is a million dollar view of the desert around the area, pictures cannot do justice to the view: 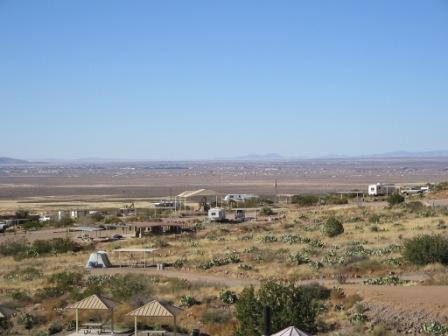 This was a view just after sunset: 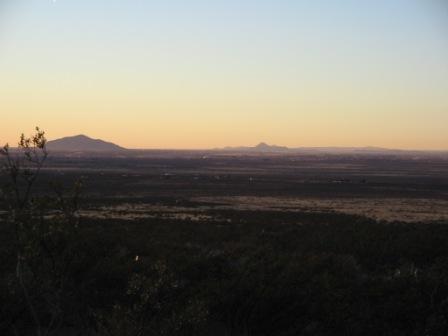 We did almost 400 easy km. today, and gained another hour (we are now on Mountain time). The roads in west Texas continue to be excellent, we can do about 65 MPH comfortably (the speed limit is 80!).

El Paso is a busy city, being right on the border with Mexico. There are lots of trucks moving goods to an from Mexico. We prefer not being in cities, so this stop is short and sweet.

Although the RV park is listed as one of "the best" in USA, it's sand and gravel, in the city, with barbed wire fencing as security. it's good that we are here only one night.

Our internet satellite, G11, is not working for us, so we are asking for a satellite change to Satmex 6, a new satellite that covers Mexico and the southern US. We may be off-line for a while during the change unless we have wifi at campgrounds. This update is being done with the free wifi at the campground.

Monday December 4, 2006In the desert at Fort Stockton Texas!

What a change in a day! The scenery changed to flat semi-desert and the road smoothed out. The view is great and the driving is easy (almost boring). The only negative is the larger number (50 or so) deer that lay dead on the side of the road, victims of collisions with cars and trucks, probably at night. 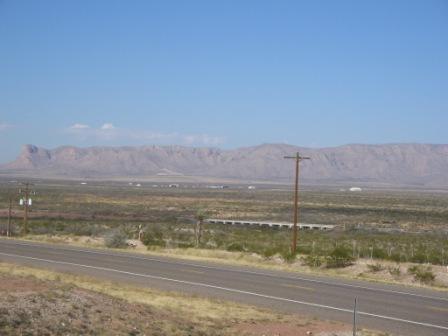 The rock in this area is a type of sandstone, not unlike that seen in southern Alberta. There are oil wells pumping here as well. 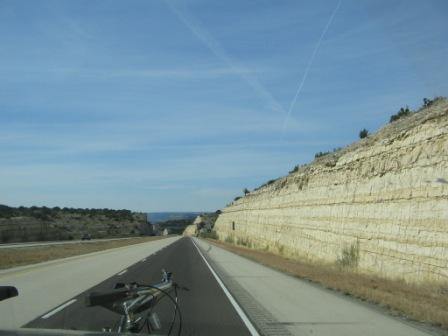 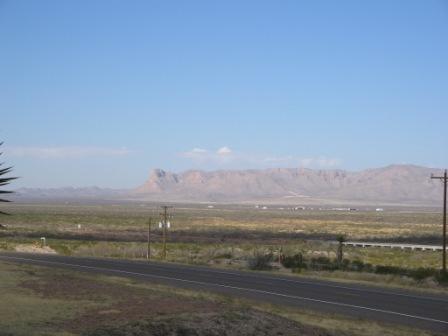 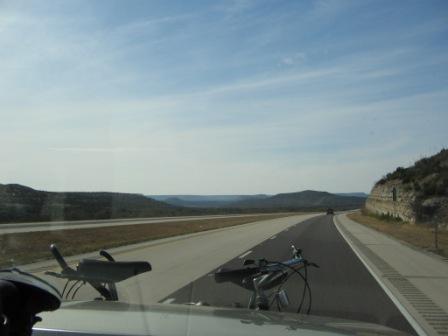 This RV campground is located just west of St Antonio Texas. Today, we made it through both Houston and St Antonio without any problems, glad we did it on a weekend.

It's still quite cold down here, it's about +10 and is expected to go down to -2 tonight, the locals are advising that the hose to teh RV will probably freeze, a few of the longer stay folks have the hose heat traced.

We sure are looking forward to some warmer weather!!

We arrived in this campground about 1:00 pm this afternoon, it is one of the better KOA's that we have stopped in so far during the trip.

I-10 on both sides of the Louisiana/Texas state line was very rough, the kitchen cupboard door opened and we found a couple of things on the floor when we arrived at the campground. Construction taking place will hopefully fix this problem

The campground is well kept and has grass and concrete pads, with enough space between sites to be comfortable: 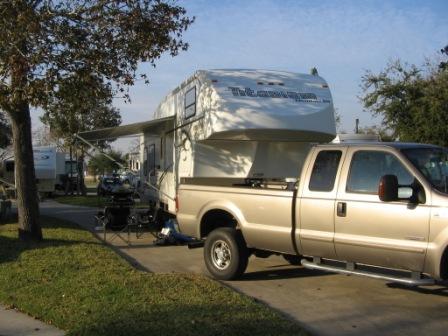 We met a number of campers and found them to be friendly, in spite of the fact that we told them that we brought the cold weather down with us from Canada!! They are fully into the Christmas spirit, as they were decorating a Christmas tree: 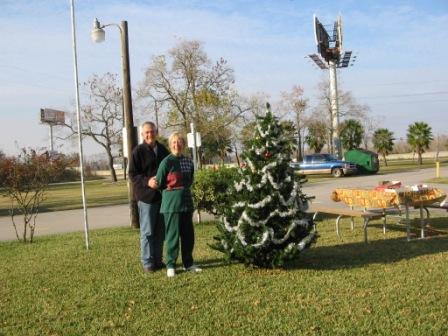 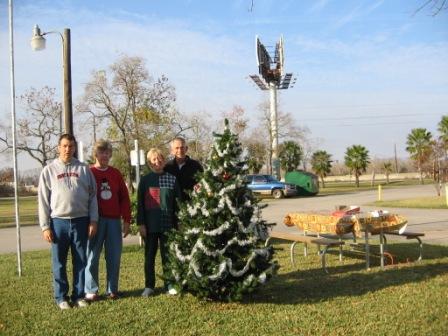 Tomorrow, we plan to travel west on I-10, we hope to get halfway through the state.

We arrived here around 1:00 pm, we are getting closer to Texas.

The weather is still cool, the anticipated low temp tonight is -1 C, almost as cold as back home. It's also cool during the day, we hope that in Texas tomorrow, it might get warmer.

We left Florida this morning and skipped through Alabama and stopped here. It's close to Biloxi on the Gulf.

The campground isn't great but it has full services. We head further west to Louisiana tomorrow, then we get into Texas.

The weather is scheduled to be bad over night (Heavy thunderstorms, followed by much cooler weather, near freezing tomorrow compared to the mid-seventies now). The locals are making sure that they have enough propane to keep warm!!

No pictures for now!

We had a great second day here, we provisioned (including fresh shrimp!) and got diesel.

In addition, the clothes were washed and we relaxed after lunch. The gulf coast was great (a little rough) but the beach was sugar white.

These are the dunes: 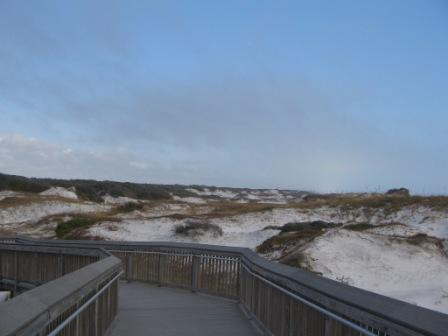 The beach was great but the water was a little cool: 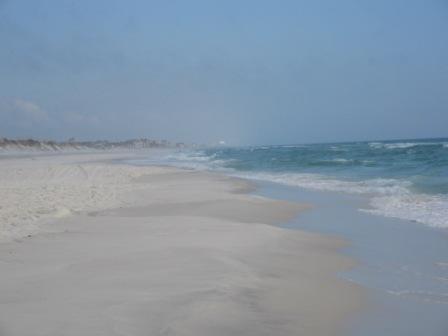 The shrimp were great on the BBQ, we did about a pound and a half, we kept some for snacking later: 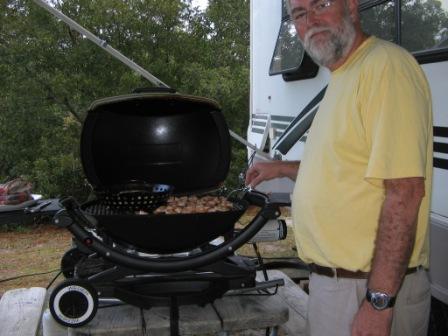 We had a guest for dinner, we are not sure whether the gator smelled the shrimp or was more interested in Kasey! 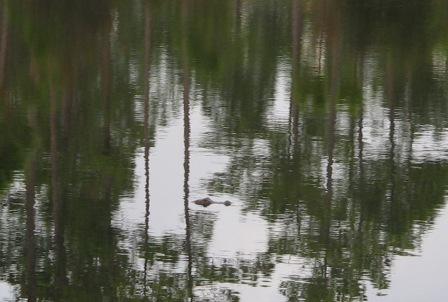 We are off to Mississippi tomorrow, it's only about 300 km. from here.